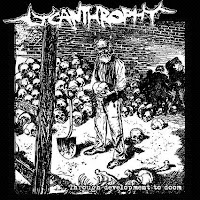 {the release out hopefully on Obscene Extreme feat in July 2009}Lycanthrophy - new tracks of ultra fast-core grind violence ala Despise You/Crossed Out w/excellent screaming frontgirl vox and ultra fast percussionist. this czech band is growning so fucking up and i wanna see them after another 5 years - they will be mighty dictators of grind violence scene at least in Europe vs. BHOC - fast grind-core darkness w/Makai members from California. they are actually back from their first European tour and they have bring a two another new records - split EP w/german fast-grind legend called WOJCZECH and split 10" w/USA grindcore madness with Despise You/Excruciating Terror members called Bloody Phoenix. Maybe you will know them from their previous split EP w/GATT from Indonesia. artwork made by Matt Loomis. 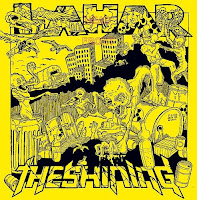 / THE SHINING split 7"EP {DEAD 013}
{the release out hopefully on Obscene Extreme feat in July 2009}Lahar - three brand new tracks of the best current fastcore/thrash czech band from Pisek with two members of crazy thrash'80 metal band called Radiolokator. if you are fan of the fastcore legends like a Hellnation/Crossed Out/Yacopsae you will love their new songs sound. Absolutly destructive and they are preparing a new songs for another record - split LP w/another czech band called Stolen Lives. The Shining - The Amsterdam isn't just a city of legal Cofffee shops and cheap cheeky girls, but this is a hometown of cult thrash metalic gangsters called The Shining. this is a band of my dreams - totally crazy godfuckers. their sound's inspirated by The Accused, Attitude Adjustment, COC. their five new tracks are great tasting before their first one-side LP and USA tour. 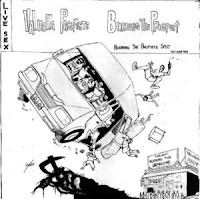 ATOMGEVITTER "Hiroshemo" 7"EP {DEAD 010}uff finally has been this EP out. five new tracks of this awesome rockin thrash-punk/blast-core band from Glasgow {Scotland} and some members are Germans. The band contains a members of Duckstab, Family Man or The Process /ex Shank/ bands and coming out with drawn front-side cover and 8 pages booklet. Limited edition to 500 copies and the cooperation between a couples of cool D.I.Y. labels from over the world. Their previous EP releases with Filthpact and Easpa Measa and split LP w/Filthpact has been with killing sound. so let's trying to listen this new one. the ATOMGEVITTER band are planing a Eastern European tour with Family man from Germany in the beginning of April 2009 - {3-12th April} through Poland - Czech Republic - Slovakia - Hungary - Germany.

VALHALLA PACIFISTS / PRUMYSLOVA SMRT split 12"LP {DEAD 009}Valhallas - awesome thrash mayhem from Harrogate (UK) with ex members Charlie Don't Surf (R.I.P) and Duck Stab. Some of VP members have been in other bands like The Deficits, Our Glorious Dead and Master Shredder. Currently in other bands such as The Let Down,Just Fucking Die and Jimmy Hotrod. For the fans of Scholastic Deth, Fig 4.0 and WHN? with naked feelings of Betercore. vs Prumyslovka - young blood of Czech fast thrashing hardcore in vein of Demon System 13 and Regurgitate band as well. Co-operation release with Keep Screaming records (uk) and Cat n Owl records {uk}.

BIZARRE X / LOADED FOR BEAR split orange 12"LP {DEAD 007}I really remember the last Bizarre X shows over the Czech Republic on tour with Kent Brockman and Space to Being. Excellent band and wonderfull freaks from Germany. Fourteen new tracks of uncompromising drum'n'bass/grind madness with a typical Spazzation sound. If you dont believe me lets try to buy a copy of this LP and insert the vinyl under the gramophones stylus. That will be a surprise yeah. They are a legendary power-violence band anyway. I can recommended their educated lyrics. 80..s hardcore - 80..s thrash metal - 80..s crossover - 80..s death metal - 80..s grindcore - early 90..s grindcore - 90..s powerviolence - 90..s fastcore. The partner of germanese veterans on this orange twelveinch is american grind-core band, i think that unknown band for many European fastcore/grindcore motherfuckers. The band is called Loaded for bear from Chicago. Their sound is a monster crash of death metal, hardcore and grindcore – fast heavy spastic loud caustic, whats more? Something like a Brutal Truth, Lack of Interest, DropDead, Rotten Sound and many more awesome grind-core/fastcore bands. The lyrics are attacking homophobia, sexism, racism, classism and the myths. Fucking killers stuff with interesting intro tracks. Some copies of this LP will be included new issue of Slap It Down newsletter – free scene info sheet of paper.


still available for sale:
COMMON ENEMY/LxExAxRxNx! split 7"EP {DEAD 006}COMMON ENEMY they are typical US "broken bones" skate thrash with snotty vocals from Pennsylvania with sound like Holier Than Thou or Crispus Attucks. Their side of this EP wax contains three ultra new songs plus another three songs that were recorded live at The Silo on June 2007 /it's great sound – i really love it/ What's more? D.I.Y. or die and Let's have some fun, comprendes? LxExAxRxNx! are South Area Italian fast spaggetti tornado, mixture of Life's Half / Negative Approach style of hardcore with modern thrashin crossover with excellent guitar riffs. Six new mighty tracks with cool political lyrics plus awesome 7Seconds cover, this their records has been many times better than everything before - seriously. I hope that they will be recorded stuff for full LP fucking soon. This seveninch is coming with nice drawn cover by Ivana Smudja.

v/a SEKEC MAZEC IV. compilation 7"EP {DEAD 004}………another issue of this legendary 7"EPs collection of Czech/Slovakian bands which has made by Steby {the percussionist of the "Pangs of Remorse" band} like a compilation of a couple of small D.I.Y. labels. The most of consisting bands are playing "fast, short and loud" style of hardcore. The bands on vol. IV are KOBRA XI {finally at the "Dead Heroes" stable} thrash-core/grind like a Monster X / Charles Bronson}, BALACLAVA {vegan straight edge animal rights band, mix of classic 80s hardcore with cool metallic riffs}, RABIES {fuckin awesome thrashing fast-core in vein of the 625thrashcore label is records}, IDIOTS PARADE {probably one of the best from current Slovakian fast-core bands with female vocal. The sound like Crossed Out.}, SPES EREPTA {vegan straight edge crusty hardcore like World burns to death or Severed head of state with members of Balaclava, Lakme and Dread 101}, COCONUT BULLDOZER {new project of SheevaYoga/Disney! members with Jason Flower, ex member of Mexican Power Authority or Third World Planet, who are living in Poland right now}.

v/a COMMON LIFE II. compilation red 12"LP {DEAD 002}
a first idea of this compilation was just making a FxPxOx/Choice of my own split 7"EP, but some another bands were contacting us to release their and we were deciding to put out those stuff like a compilation coloured 12"LP. …………… second issue of our unknown bands compilation that's finally released on the vinyl - 12"LP. It's a five long years since first issue of the COMMON LIFE compilation {on tape}. We were having a lot of troubles with this 12"LP during the time, but the vinyl is already out and we are really happy to tender to you. The most of bands are fuckin young and it's not easy for this kind of bands to put out their stuff on the wax. We're glad to help them anyway. Second issue of CL contains those following bands – two Russian thrash detonations GEORGE HARRISON {they've had a split EP with Conga Fury as well, thrashing crossover hardcore in vein of a Suicidal Tendencies and DRI}, CAPTAINS AMERICA {a little bit more old school 80's hardcore than GxHx}, two Macedonian very political thrash bands FxPxOx {split LP w/Seein Red on 625thrashcore label and last LP on ThirdXparty, EP on Commitment rec}, CHOICE OF MY OWN {thrashing hardcore inspirated by WxHxNx? w/members of FxPxOx, those guys are fuckin young but totally active, because they are playing in another four-five bands, but each one different kind of hardcore. R.I.P. at this moment}, LOW VISION {total japanese ultra crazy thrash hailing w/typical brutal dirty sound and awesome vocal}, LxExAxRxNx! {Palermo pirate skate-core gangsters from South Italy, they have a full 7"EP and split EP w/Common Enemy from the States}, DUCKSTAB {raw 80's hardcore is coming from Leeds, UK, really nice sound}, SMD {USA veterans of thrashing crossover hardcore close to DRI, Suicidal Tendencies. I like them so much. New LP/cd on SIX WEEKS + tour w/Capitalist Casualties}, THIRD DEATH {unknown skate thrash young band from United States} and the last one is a Czech band called STILL STRONG {fast thrashing hardcore w/typical Japanese screaming voxxx. They've changed their line-up and sound as well a couple months ago. Now they are faster and louder than before}. Full amount of 500 copies is pressed on coloured 12"LP {red one} and decent full-colour cover.


Please check out our myspace profile for more details and tasting tracks of the most of released bands. we're actually working on new huge DEAD HEROES BROS distribution catalogue with tons of hardcore/punk/thrash/crust/d-beat/grindcore/power-violence items on LPs/10"s/EPs/CDs/. you will find a lots of patches/buttons/stickers/t-shirts/sweatshirt/hoodies/jackets. the all clothing items are on good quality stuff by Fruits of the Loom. you can also ask about wholesale price of our DEAD HEROES BROS releases. Cheers Ondra 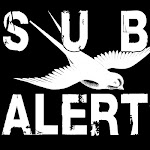